Lines connect us – I can strike up the most surprising conversation with my neighbor in the check-out line. And lines divide us: I’m drawing this one in the sand and dare you to step over it.

In conga lines we share rhythmic moments. In lines of poetry we break open stories and make room to put things together that are clearly out of place in prose.

A brief catalogue of lines

He wanted to mark his words:
the shortest distance was a _______
between
the ● he was making and the ●
of his knife,
(with which he wanted to pin me
before giving his blessing)
a  _______
that ran clear through me
as if I wasn’t even there.


The teachers went on strike in 1974,
my 2nd grader and I took sandwiches down to the picket _______
and we laughed because the 2nd graders, they knew
how to stand and walk in a _______.
The teachers meandered, had no discipline,
modeled being
gloriously
out of line,
signs tilted this
way and that.


Cheerful Londoners, 1966 and even now,
they queue up
at the bus
stop. 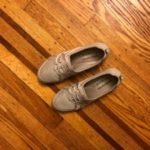 A radical new foothold since I last wrote

A door opens on the new decade

On North Avenue, A Chance Encounter with Dignity