I have found myself jittery and anxious the past few days – and concluded it was anniversary jitters, as we approached Election Day 2017, a one-year marker of sorts. Not unlike the anniversary of more personal traumas – say the death of many loved ones during the month of March. Related feelings of grief that wash over me in the spring sometimes take me unawares. There was no way to be unaware Election Day was immanent and the color line accentuated.

I have also been dreaming, vividly.

For which I am grateful: these dreams have been instructing me about shifts in how I perceive and make meaning. It is during sleep that our neurons are pruned and our learning is consolidated.

To all appearances we were eight white women of various generations seated around a table in a well-appointed middle-class livingroom. The table had been set for lunch with a starchy cloth and full place settings. We had just finished lunch. Our mostly-empty plates sat in front of us.

My mother was sitting not directly next to me, a woman between her age and mine sitting between us. Mom was quiet, though it was a setting in which she could be at home.

Greg C., pastor and executive director at a local spiritual wellness center, came into the room, greeted each of us as he went around the table, and then left. I knew Greg lived a life of practice, although different from mine. He had his own deep and truthful way of listening to text and life.

Then the youngish woman sitting across from me told her story. Of how, at a young age, she was separated from her family at the auction block. How she  was sold with her mom, “but of course the sons went with their fathers when they were lucky.” She filled in  details. Tears rolled down my cheeks. Around the table every woman, including my mom, was crying.

Abruptly I woke up.

It is the day after Election Day. I have not yet seen the results of the campaign for governor of Virginia that, after some months of focus on local bread and butter issues – transportation gridlock, affordable housing – had turned acrimonious with an influx of campaign bucks from all quarters of the nation, and inflammatory rhetoric about confederate monuments and laws regulating women’s wombs.

Step up to the color line and listen.

Whichever side of the color line we grew up on, it’s long past time for each of us to listen prayerfully to generations of stories of the color line. To live inside one another’s stories, as the women in this dream. To weep together. To guard these stories as treasured truthfulness. To take in what it means “to pass” – as a woman of color, as a human being, as a democracy. To wrestle what it could mean to rebuild a democracy founded on knowledge of our shared and deeply flawed history.

One story at a time.

When we don’t recognize our own stories, they are powerful unthought knowns that steer our perceptions – and our votes.

It takes courage to risk the telling, humility to risk the listening. As we allow one another’s stories to live, to take up a square in our quilt, we birth one another into our full sorrowing humanity. That’s when we stop “passing” as humans.

Who knows what we might create together out of such broken-heartedness, how we might bend, bend with the long arc of the moral universe.

This week, whose story are you prepared to invite – without burdening the teller with your desire to understand?

This week, whose story are you prepared to receive?

We cannot "#metoo" and leave our weeping behind 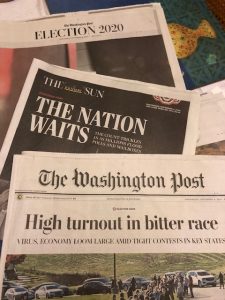 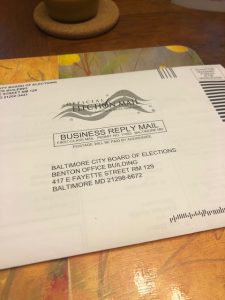 Re Voting Plans, Tilt-a-Whirls, and Trust